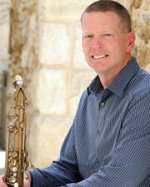 Dan Gailey is the Director of Jazz Studies and Professor of Music at the University of Kansas, where he directs Jazz Ensemble I, teaches courses in jazz composition, arranging and pedagogy, and produces the annual KU Jazz Festival. He has been named to a coveted Chancellor's Club Teaching Professorship at KU for 2017-23. Dan is the recipient of the 1996 IAJE Gil Evans Fellowship, presented to an emerging jazz composer from an international field of candidates. Under his direction, the KU Jazz Studies Program has been the recipient of 25 DownBeat Student Music Awards, including Jazz Ensemble I's 2015 award for Best College Jazz Ensemble in the Graduate Division and their Outstanding Performance Award in the same category in 2017.
As director of KU Jazz Ensemble I, Dan led performances at Jazz at Lincoln Center in New York City, Kennedy Center for the Performing Arts in Washington, DC, Montreux Jazz Festival in Switzerland, Jazz a Vienne Festival in France, Monterey Next Generation Jazz Festival in California, Umbria Jazz Festival in Italy, and the Kauffman Center for the Performing Arts in Kansas City. He also directed the band in invited appearances at International Association of Jazz Educators Conferences in New York City, Atlanta and Boston.
The Dan Gailey Jazz Orchestra debut CD What Did You Dream? was released in July 2010 on Origin/OA2 Records and features all original compositions by Dan. The CD spent almost 2 years on the JazzWeek Radio Airplay charts, and received favorable reviews from JAZZIZ, JazzTimes and Cadence magazines, among others.
Dan has directed all-state high school jazz ensembles in Arkansas, California, Colorado, Iowa, Minnesota, Nebraska, New Mexico, Oklahoma, Oregon, Texas and Washington, along with the 2015 NAfME All-Northwest Jazz Ensemble and the 1996 National Band Association National High School Ensemble. He holds degrees from the University of Northern Colorado (MM) and Pacific Lutheran University (BM).